Government of the Republic of South Sudan, (2019)

Five Ebola alerts were reported from 19 – 25 July. Rapid response teams were deployed for case investigation and sample collection. GenXpert and Polymerase Chain Reaction (PCR) test results were negative for the two samples that met case definition. The Hon. Minister for Health and WHO Representative made a press statement at South Sudan Broadcasting Cooperation (SSBC) to dispel rumors and misinformation circulating following an EVD alert reported in Juba that created lot of panic. A lot of rumors were generated on social media. Two linked drills for National Rapid response team and case management teams were conducted in Juba on 26 July. The drills tested the functions of alert notification, Rapid Response Team activation, deployment, case investigation and transfer of a patient, triage and admission and isolation unit. The purpose of these simulation exercises were to the operational readiness of the RRT and the Case management team. Similar Drills will be conducted in Nimule, Yei, Maridi and Yambio in August One hundred and eighty (180) frontline health workers were vaccinated against EVD in Yei River state. The cumulative number of front-line health care workers in South Sudan is 2,973. 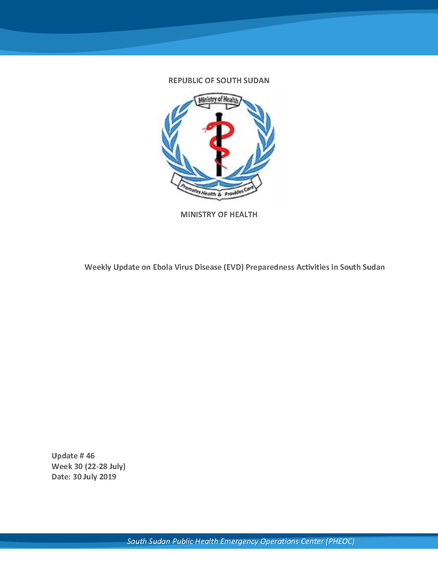