New WHO prevalence estimates of mental disorders in conflict settings: a systematic review and meta-analysis

The Lancet Published Online June 11, 2019 http://dx.doi.org/10.1016/S0140-6736(19)30934-1 More than one-in-five people living in conflict-affected areas suffers from a mental illness, according to a new UN-backed report, prompting the World Health Organization (WHO) to call for increased, sustained investment in mental health services in those zones. Around 22 per cent of those affected, suffer depression, anxiety or post-traumatic stress disorder, according to this analysis. The study also shows that about nine per cent of conflict-affected populations have a moderate to severe mental health condition; substantially higher than the global estimate for these mental health conditions in the general population. 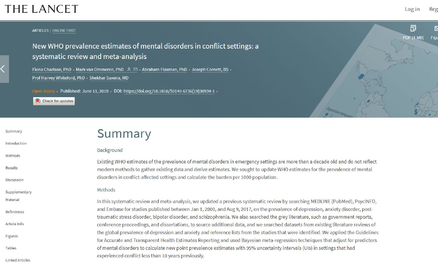