PLoSONE 14(9):e0223104.https://doi.org/10.1371/journal.pone.0223104. The survey centering on reasons behind community resistance was conducted in Butembo in November during a time of Ebola transmission. A researcher from Catholic University of Graben in Butembo and collaborators at the University of Alberta in Edmonton published their findings on Sep 26 in PLOS One. To spark focus group discussions, the researchers used an 18-item questionnaire based on similar ones used during West Africa's outbreak in Guinea, where community resistance and episodes of violence also complicated the outbreak response. Participants were a convenience sample of 670 adults from the region who were recruited by medical students at Catholic University of Graben. Those surveyed included clinicians, community members, and displaced persons. 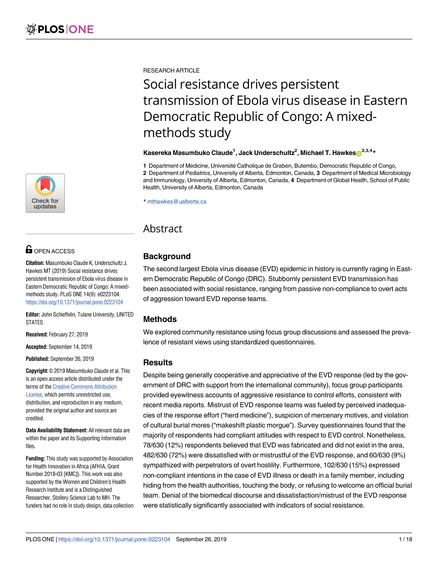